" Back To The Future" Time Circuits Desk Clock

This functional  desk clock  is built  to resemble the time circuit  display in the Delorean time machine that was featured in the cult classic movie: "Back To The Future". Clock shows the dates  and time Mary McFly traveled to in  the movie. " Present Time" displays the current time . Buttons on top allows you to set the current time.  Completely handmade, it features all aluminum construction , and plugs into any household electrical outlet.  Pictured here are all three time circuit clocks that I built before the October 21 2015 anniversary (when Marty and Doc went into the future in the 1989 movie) . This build has garnered a lot of attention since I built the first one in early 2014.Being featured on many websites worldwide, it's still one of my biggest hits to date. It also inspired others to create their own versions  of this clock for sale since then.

This actual speedometer from a vintage 1959 Plymouth Belvedere automobile was repurposed into a functional electric desk clock. The illuminated speedometer needle shows the current hour by how "fast"  it's going ( 10 mph = 1:00,  20 mph= 2:00,  30 mph= 3 :00 , etc.). Moving gauges, , blinking warning and hazard lights, and V8 engine sound effects all happen throughout the clocks operation to give it added animation. The temperature gauge slowly rises, then when it reaches "hot" the oil lamp flickers and the hazard lamps flash, all the while the fuel gauge slowly decreases.Everything then resets and starts over. Since working on old cars is a hobby of mine, I always wanted to make something like this but had the idea shelved for some time until I found an instrument panel that would look handsome as a clock.The clock operates on 2 separate cpus and a basic audio board. Clock also has a switch to mute the sound if so desired. 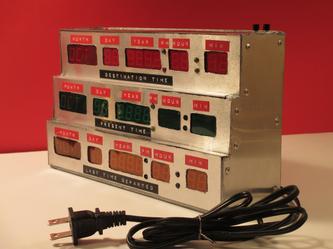 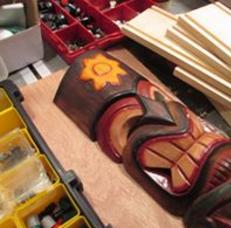 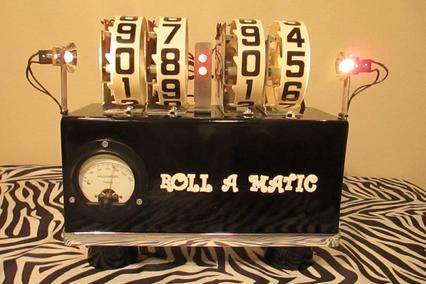 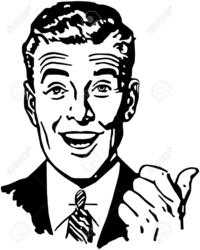 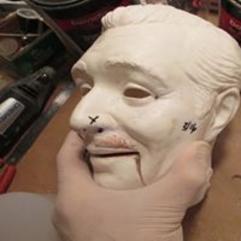 Left side- TV on

This was the first of my animated clock builds and is themed around the classic Enchanted Tiki Room's garden pre-show at Disneyland.

Thinking something like this should have been available in a Disney park souvenir shop, I decided to make one.At the top of every other hour this functional electro-mechanical clock comes alive as the animated tiki inside recites a different performance from one ofthe tiki Gods at the Disneyland attraction. This build was tricky because of the limited space to work with , being that I didn't want to make it too big since it's a wall clock.Also, animating a real tiki mask was a challenge because of it's shape. Most of the  wiring and electronics are housed up in the roof area and consists of 2 logic boards, 2 driver boards, and an audio board .I also designed it with "sleep mode," which by flipping a small switch enables the clock to keep running while disabling the sound and animation.

This build was a big hit with the public on social media when released  ,so much so it was sold within 24 hours of posting it. I received  many requests to build another since. 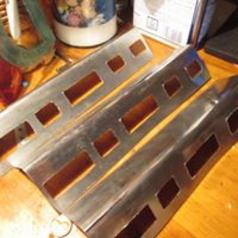 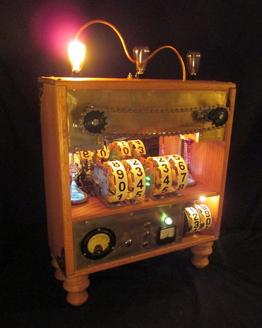 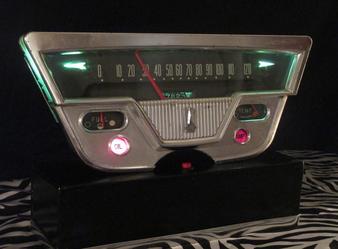 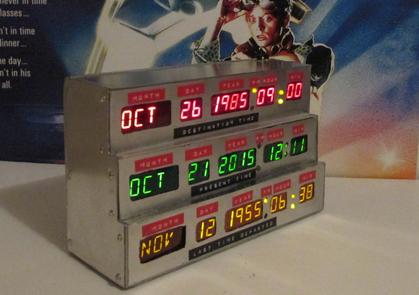 Early stage of the build ,working on the mask 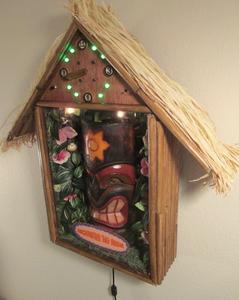 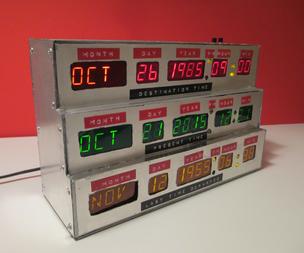 Right side -TV off

This crazy electro-mechanical clock shows the current time and date as well as many flashing Edison lights up top and an additional long Edison bulb inside.Moving gauges,illuminated bubbling liquid, and a randomly moving chain and sprocket assembly gives it even more animation. For this build I wanted to make something really over the top with an antique feel that looked like perhaps an inventor from the early 20th century could have built, and so I incorporated everything mechanical I could think of into this solid oak wood with brass clock. Four large solenoid driven number wheels display the time with a loud "clack", while two smaller solenoid driven number wheels display the date. It Features 4 logic boards ( master and 3 slaves). This was sold to a magician as a  stage prop to his show performances.

NOTE :Some videos may have been muted because of copyright laws. If you wish to view a video that has been muted, contact me for the video file. 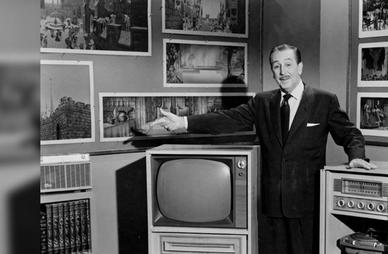 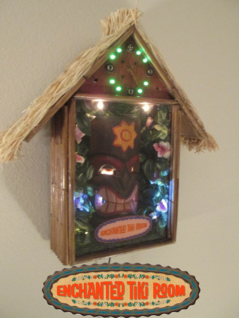 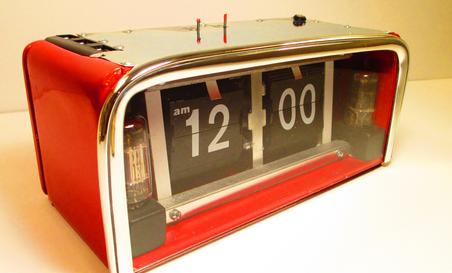 This  big rolling number flip clock is made using restored antique parts and new circuits/wiring mounted on a glossy black finished wooden base for a very unique desk clock. Each 4" diameter number wheel is driven by a 25 volt solenoid (electromagnet) and gives a loud mechanical "clack" with every minute/hour that passes. I also added a chime that rings on the hour.  Another interesting feature I incorporated was an analog gauge with a needle that moves back n forth to count the seconds.  An internal cooling fan keeps the inside of the clock at a safe temperature..

The followup clock "Revolt!", to this build can be seen on my "Product Videos" page.....

The Time Circuits Clock in the beginning of it's build...

This was my second  animated clock build, this time based on Walt Disney himself. At the top of the hour (adjustable to play every hour,every other hour, or once every 3 hours)) ,the TV automatically turns on by itself as an animatronic Walt Disney recites episodes from the 1950s-1960s TV show series "Walt Disney Presents" and "Wonderful World Of Color"in his actual voice.

A very different project that uses a vintage TV  which I restored then built a robotic Walt Disney who interacts with the working miniature TV inside. Many hours of programming went into this machine so that it preforms a different show and animation every hour ( one of dozens) with corresponding vintage Disney video to match his dialog. It also has a "sleep mode" feature  like my Enchanted Tiki Room Clock,when silent operation is desired.  Circuitry includes 2 logic boards, an audio board,a video board, and 4 driver boards. Between designing, building , and programming ,it was a challenge, but the finished product was worth it. 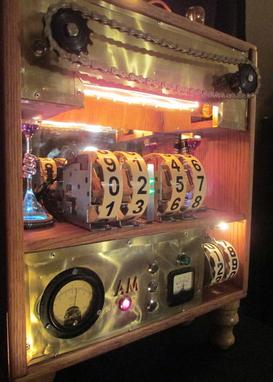 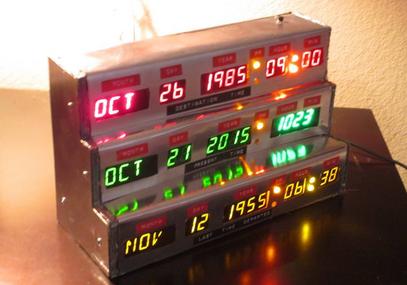 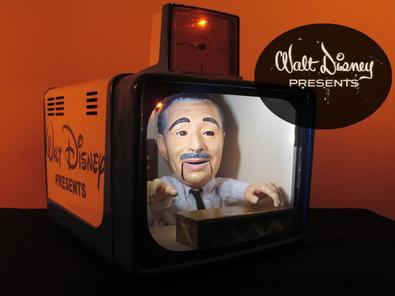 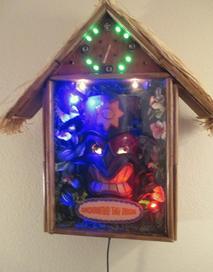 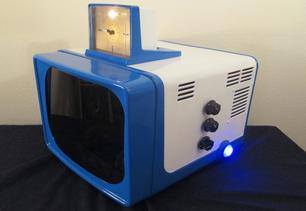 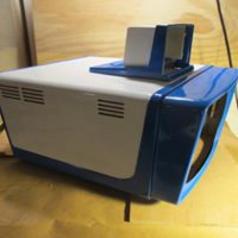 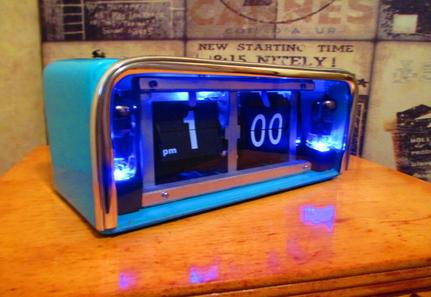 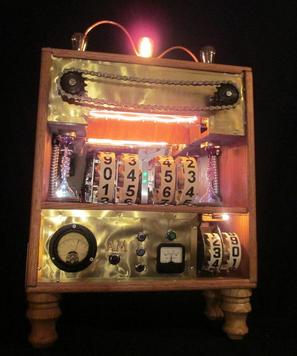 This handmade electrical flip clock features automatic illumination by the electric blue glowing  tubes on each side and an additional glowing light in the back which turns on in a dark room to light the numbers. I made two of these clocks,both are the same except the red clock has a built in 3-port usb charging port on top. Powered by a 12-volt AC adapter. The case is wooden with a glossy enamel finish, complete with chrome trim and a plexiglass face.