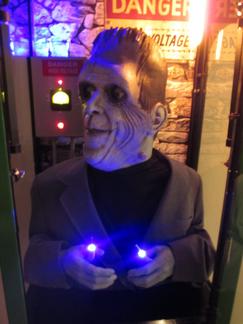 A customer came to me with a Zoltan fortune teller machine that wasn't working and desired to upgrade it with a modern operating control system. He supplied me with the original fortune audio tracks that was transferred into mp3 format, and I designed an easy to install system that operates like the original, but with using solid state electronics so that it will provide many years of service.

For this build it was tempting to improve the machine by adding to the way it operated, such as pulsating and programmed lights to give it more life, but the customer wanted to operate just like the original,so that's what I did. . 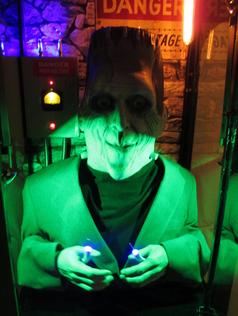 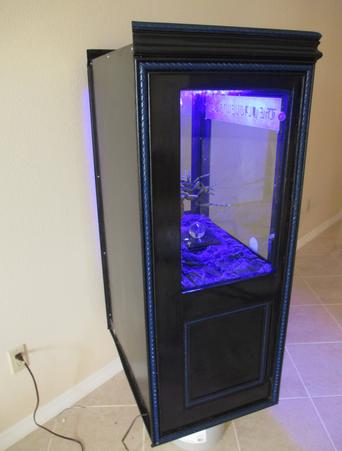 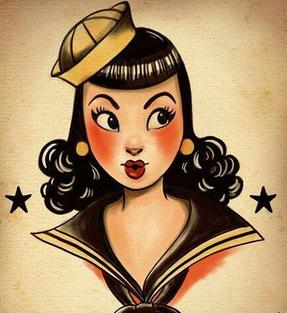 If you enjoy old EM games, visit my customer's

website. He has a cool collection of machines and other items including this Zoltan. 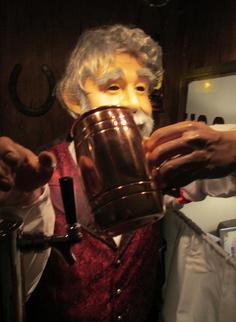 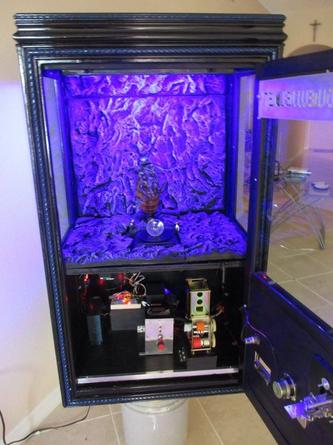 This interactive machine based on the hit 1960's TV sitcom "The Munsters" requires you to keep the two push buttons held down to keep the performance going, and actually surprises you with an electric tingle towards the end! Can you hold on ,or will you let go and let Herman return to sleep (game over)?

This full-sized machine I designed and constructed stands at 6' 4" tall and is loaded with exciting features! The mechanical Herman Munster opens his eyes, looks left and right, turns his head left and right as well as forward and backward. He also moves his arms in and out and says something different each time a coin is deposited.

Pushing the buttons keeps him animated as he talks. During the performance the electrical box turns on with a moving analog gauge,flashing lights,and electric blue flickering "conductors" up top. Herman becomes curious by this and moves the two electric cables he's holding together. When they touch, a buzzer sounds and a strobe light comes on as Herman (and you) get shocked!

This build has a lot going on. I first had to design and then construct Heman's mechanical motions, and then design and construct a cabinet to house him in. Then it was time to design and program a system that would return Herman to default position when you let go of the buttons ,as well as design the little details such as the animated electrical box,the shocking system, and all the programmed lighting throughout.

(Shock produced is a mild and harmless tingle ,and is adjustable) 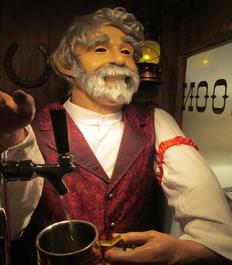 This was a custom ordered "misfortune " teller machine I built for the artist Max Hooper Schneider to be displayed in an art gallery in Paris, France. I crafted the cabinet, mechanics and electronics, and Max provided the finishing touches.

Click on the button to view the article posted by the art gallery on this machine.

An animated flea inside a post-apocalypic  cabinet moves around to doomsday music as an illuminated crystal ball spins. At the end of the program a "misfortune" card is vended describing how you will die in the plague.The flea's head also moves when you walk past the machine while it's not in operation. A different twist on the classic  fortune teller machines.

I designed and built the cabinet from scratch, and installed motors to animate the flea figure supplied from the customer ( flea figure was previously used in a 2008 cell phone TV commercial). Operates on a basic system with three circuit boards ( master, slave, and audio).

Some later changes Max made was the removal of the marquee, a stationary crystal ball,more scenery inside, and side glass covered. 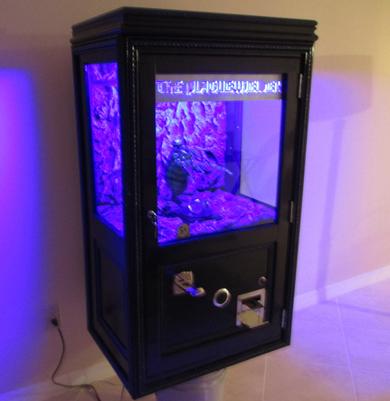 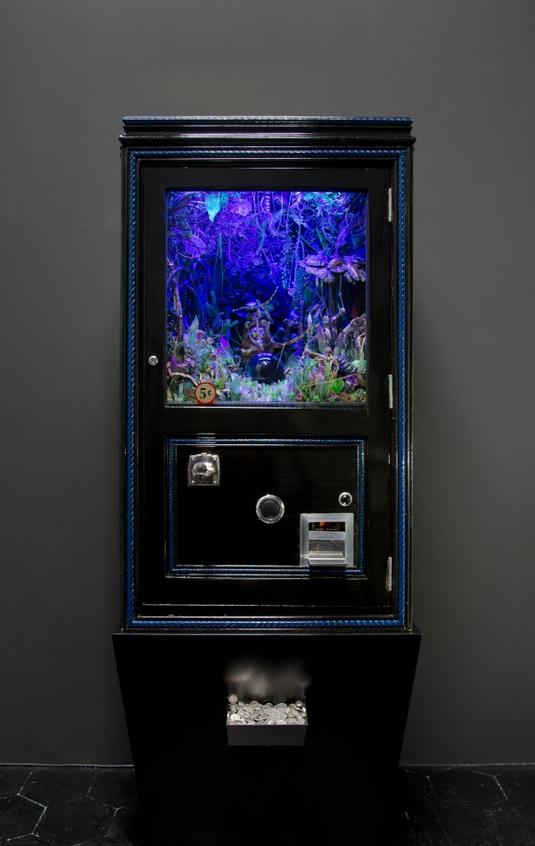 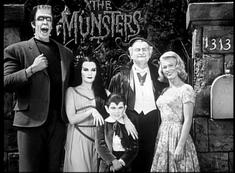 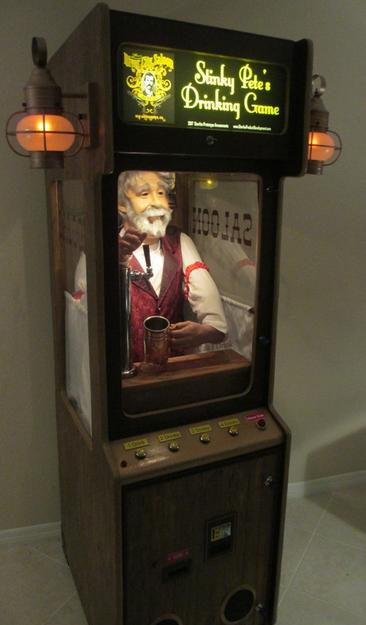 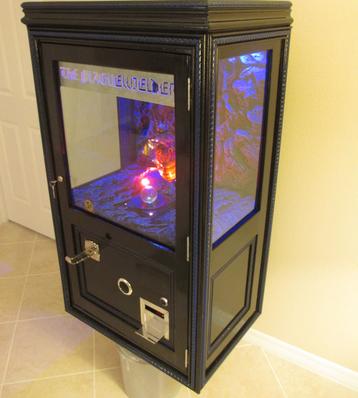 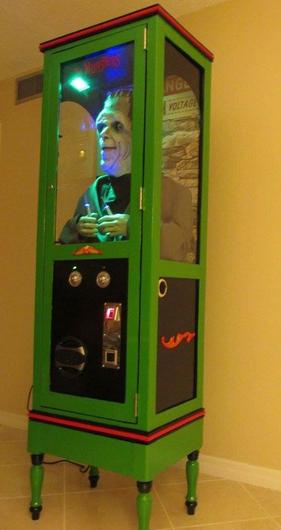 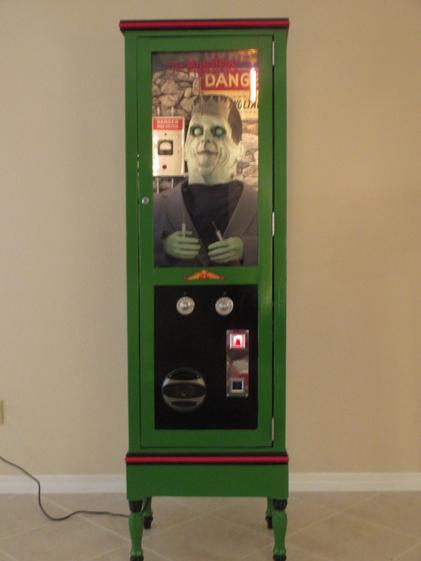 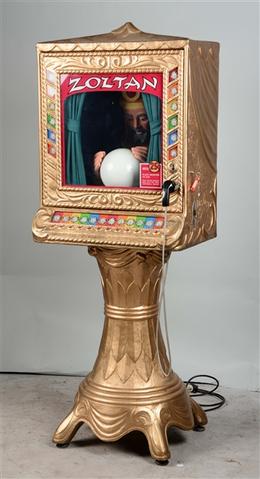 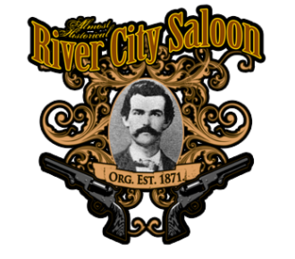 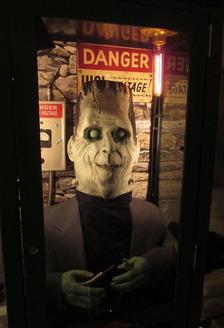 This machine was made for River City Saloon in Old Sacramento ,California. Player has to guess how many beers the animatronic old west bartender will drink by pushing a button to select 1-4 beers. If the player guesses right, the machine vends a voucher for a free drink  at the establishment (if you guess wrong the character laughs at you).

This build took a good amount of time from the designing phase to completion, and was pretty challenging. The key point I wanted to implement was to have a random winning drink . Difficult but not impossible, it works like a slot machine where making a selection/guess by pushing a button will provide a different result every time, with a loose to win ratio programmed at 7:1.

The handmade character was built from scratch and  features moving and blinking eyes, moving mouth in sync to speech, head turns, arms move up and down, and body leans forward and back. One of my more technically complex systems to date, it features a main logic board, 5 slave boards, 2 audio boards , and two additional boards for the bill validator and flickering lantern.

For the cabinet I tired to give it an old saloon feel inside and out with embellishments like illuminated lanterns,and simulated weathered wood .

A very entertaining and humorous machine and my second animatronic game.